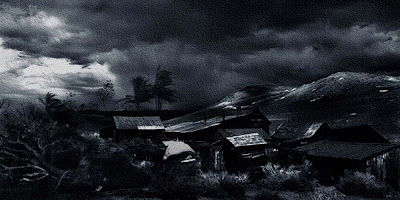 It was a dark and stormy night...the night before. The town is peaceful and quiet now, though the signs of devastation are evident. A hurricane has swept through the town leaving almost nothing standing on its way. Windows are wide open and the trees uprooted here and there. Nothing but a soft cotton dress is hanging from the line at a distance. And a rumor is floating around in the cold night air the night after. "Not a word of good bye, not even a note - she's gone with the man, in the long black coat..."

On the outskirts of town, the night before, at the old dance hall, somebody said he saw the man hanging around. "Dust Thou Art, and Unto Dust Shalt Thou Return" And somebody said "there was dust on the man, in the long black coat." She stopped him to ask if he wanted to dance. The man looked into her eyes and she saw his face; or was it a mask?

"Preacher was talking there's a sermon he gave
He said every man's conscience is vile and depraved
You cannot depend on it to be your guide
When it's you who must keep it satisfied"
The man, was he a sinner or a saint? He had a face or a mask, or was his face a mask? What has he to hide? And she's gone and "it ain't easy to swallow it sticks in the throat", 'cause "she gave her heart to the man in the long black coat". Was she right or wrong in doing so? It depends on how one sees it; as "there are no mistakes in life, some people say - its true sometimes, if you can see it that way". One cannot really decide for sure though as "people don't live or die, people just float" but she can as  "she went with the man in the long black coat".
And now the time has come...it is the calm before the final storm. One can feel the rumbling force, the pulse and vibration of the approaching end. "Somebody is out there beating on a dead horse", too late, too late. For the man is gone. And so is she. Why? That no body will know. 'Cause "she never said nothing, there was nothing she wrote - she's gone with the man in the long black coat".
Who was the man? Where from did he come? What did he ever want? The search begins...
...to be continued. 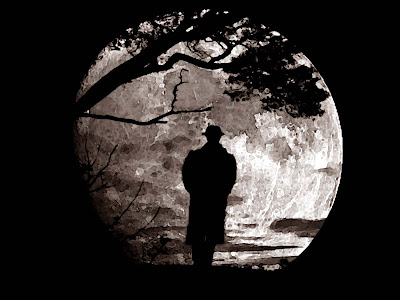 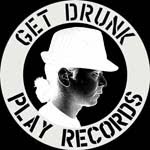